A collection of things that make us say, "RAWR!"

I happen to live pretty much equidistant between two Costco’s aaaannnddd I have a membership. So I go there. A lot. When I think about my culture, I’m pretty sure I’m a part of the Costco culture. As much as I love Costco, I am not quite one of their disciples. We usually go with a budget, which is less fun, but more practical.

If you aren’t familiar with Costco (or Sam’s Club, just Walmart’s version), I have to ask in what hole has your head been stuck for the last 10 years? So I will assume we all know how awesome Costco is. Yes, it’s hard to find anything for less than $10 and even harder to leave spending less than $100, but that is because they are so good at temptation.

“Oh yes, get your toilet paper, but we’ll make you walk to the back of the store for it, past all the goodies!!! MWAHAHAHA!”

With a little extra free time, I found myself wandering the aisles, contemplating what gadget or gizmo would actually make my life better.  Aside from the bulk quinoa and a dog bed, I didn’t find much. That is… until I found THESE! I had to restrain myself from L-I-T-E-R-A-L-L-Y  “SQUEEE”ing in the store. If I had a million dollars I’d buy these all up and distribute out RAWRS like party favors. But alas, I don’t have a million dollars, so you’ll have to settle for some photos. 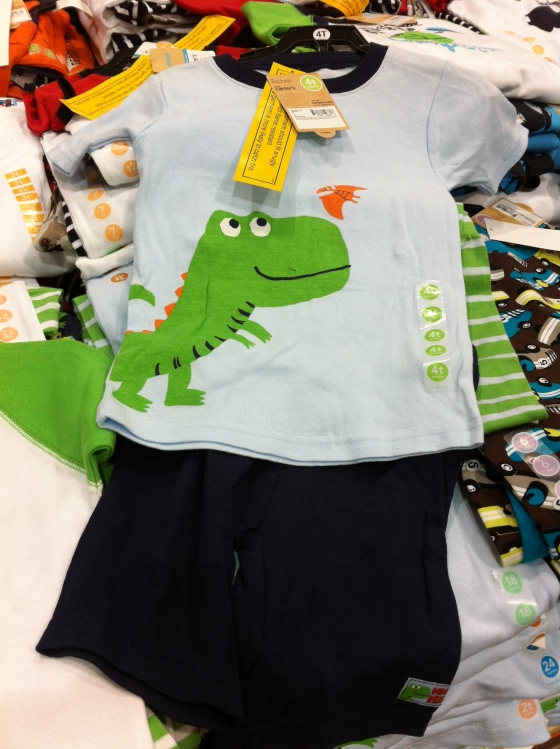 My only two comments back to Costco would be, where are the PINK dinosaur jammies? Even girls like dinos. And find some grown up footie pajamas, please. You know those would sell like hot dogs!

One thought on “Dino Diggs at Costco!”